On the corner of Obispo Street and Monserrate Street, a tavern opened, which was to have an exceptional destiny. At that time it bore the name of "Piña de Plata" (Silver Pineapple). It occupied the ground floor of the house of this crossroad of old Havana. It was the ancestor of the Floridita. When the Piña de Plata was almost a century old, the large number of north American tourists persuaded the owner to change the name. He renamed it "El Florida". With time, people called it "El Floridita". 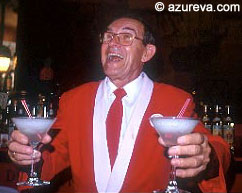 In 1914, Constantino Ribalaigua Vert offered his services to the Floridita. The young Catalan didn't know that he was at the dawn of a great career as a cantinero (bartender).

In 1918 Constante became the owner of the Floridita. The house is still famous for the quality of its cocktails. People knew that they can find there a school of "cantineros" with professional standards, that of the disciples of Constante, the Master mixer. Constante exhibited his supply of fresh lemons, he squeezed them with delicacy on his machine. The frequently prepared cocktails were rum-based products mixed with grapefruit, orange and pineapple juice. 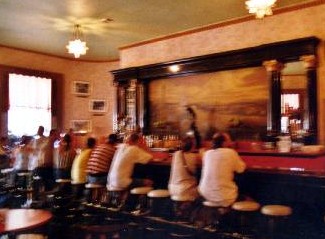 A bright sign in the night, doors which open smoothly, pleasantly cool conditioned air. And the bar, impressive and restful with its warm colours, brightness woods and colonnades framing the picture of historic Havana. Nothing has moved. Yes, it's really the Floridita. Still there, at the crossroads of Obispo and Monserrate. At one end of the famous bar where so many stars have leaned, a chain protects the mystic seat of the author of the "Old Man and the Sea". Today as always, the magic of the place, of the "Cradle of the Daïquiri" works. Fashion models, movie stars, fashion designers or simple tourists. all come for the setting, the story, to follow in the Hemingway's footsteps. They crowd into the Floridita to find again the unique atmosphere created by the cocktails magicians, the "cantineros", those legendary bartenders who continue the art of the great Constante.

Today's Floridita, it's also a restaurant of international class, which is located in the inimitable round room, which is next to the bar. Here seafood of the Cuban sea occupies the place of honour: fish, lobster, shellfish.